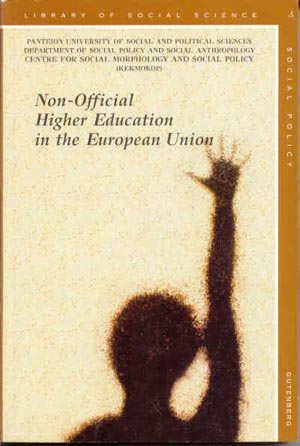 Non-Official Higher Education in the EU is a survey conducted in 1997, with the moral ans financial support of DG XXII of the European Commision, by nine Research Centres in their respective countries. The survey showed the emergence of an expanding, rapidly growing, strongly internationalized, and very competitive market of non-formal University level education services, ewhich extends far beyond the area of the EU. Its impact on official European education systems remains to be assessed. Yet three major facts became evident in the course of the survey. First, operations, practices types and quality of education services offered in the area of non-official education are to a considerable extent loosely regulated both at the national and the European levels. Second, although the prerogative on the matters of education rests with national governments, experience shows that as thing stand today national authorities are not always in a position to control effectively offshore operations nor are they always able to detect and avert fraudulent practices, and thus protect direct and indirect consumers of education services. These two facts point to the need for more concerted action at European level. Finally, Univeristites are actually placed in a rather contradictory position. While they have to defend themselves against competitors operating in the market outside the official and formal system, they are at the same time often led to enter and actively participate in this very market themselves.

Non official higher education in the EU; in Austria; in France; in Greece; in the Republic of Ireland; in Italy; in the Netherlands; in Norway; in Spain; in the United [Περισσότερα…]