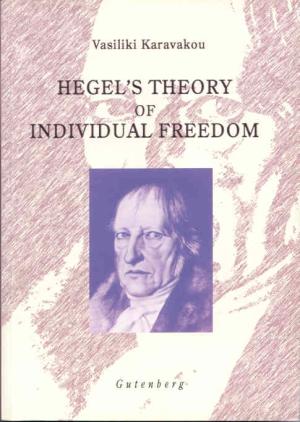 The issues crucial to Hegel’s philosophical theory of freedom are neither peculiar nor artificial to us today. Can we reject the truth that human beings still embark on a paideutic quest in order to attain inttegrity and self-recognition without selling short their sacred belief in freedom? Can we defend individual liberties and rights without lapsing into the myth of the privileged solitary subject? Most traditional accounts of Hegel deny the significance the concept of individual freedom has in his ethics and politics. Some even deny that Hegel has an argument for individual freedom in the first place. There is a resurgence of interest in Hegel’s ethics and politics and this book contributes to the debate by asserting that Hegel does have a theory of individual freedom which turns to the preconditions of freedom as they are deeply implicated with his other major educational and cultural concerns. The author offers an analytical and re-constructive exposition of Hegel’s cognitivist theory according to which freedom is a complex, generic concept with descriptive and evaluative character, standing for a property that can be attributed both to the individual and the social world. The book also provides a critical discussion of the internal strains and limitations of this theory ad considers the ethical and political implications on the modern demend for individual freedom.